Ballet is a type of dance full of graceful and artistic movements.  These are usually set to music and tell a story.  Ballet began in Europe in the 16th and 17th centuries.  Famous ballets include The Nutcracker and The Sleeping Beauty. 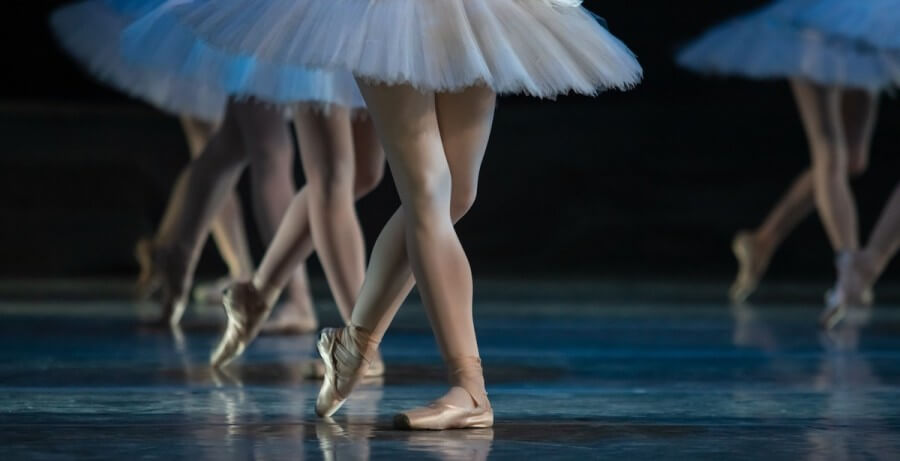 Prima Ballerina means ‘first dancer’ in Italian.  It is the name given to the leading female dancer in a ballet company.  This dancer is playing the lead part in the Russian ballet, Swan Lake.  As Odette, a princess turned into a swan maiden, she stretches her neck and moves her arms to look like wings.

Ballet dancers are taught five basic positions for their feet.  In first position, the feet are turned out, with the two heels touching.

Most ballet dancers start classes when they are children.  They learn the basic steps to music.  Often a class has a pianist to play the music.  The students in the class (left) are practicing moving their arms in a port de bras exercise.

Under strong stage lights, the features of a ballet dancer’s face tend to disappear.  So to make sure the audience can see them, male and female dancers wear make-up.  Dancers do their hair and make-up in a dressing room.

Costumes can be traditional or modern.  Many feature a pleated skirt called a tutu.  A major ballet may need up to 300 costumes.  A ballerina wears pointe shoes, which allow her to do pointe-work (dancing on the tips of her toes).  They are kept in place using long ribbons.

A major performance of a ballet takes place in a theatre.  Often a full orchestra led by a conductor provides the music.  A ballet is usually divided up into sections called acts, with short breaks called intervals in between each act.

Ballets are set to music written by a composer, with the dance movements arranged by choreographer.  Many early ballets were produced in Russia.  The Ballets Russes was a ballet company that toured Europe and the USA in the early 1900s, creating great interest in ballet.

The Russian composer Tchaikovsky wrote the music for The Sleeping Beauty.  It was his first successful ballet.  His success was largely due to his working with the choreographer Marius Petipa.

After working on The Sleeping Beauty, Tchaikovsky and Petipa created The Nutcracker in 1892, a ballet about a girl who dreams of a toy nutcracker turned into a prince.  Today, it is often performed at Christmas time.

The main character of the fairy tale Puss in Boots – the cat who helps his master – makes an appearance in The Sleeping Beauty ballet.  This light – hearted character and the White Cat are often danced by junior soloists who are not ready for principal, or main, roles.

Swan Lake is one of the most difficult ballets to perform.  It includes the character Odile (a black swan maiden), a prince and an evil sorcerer.

This French ballet was first performed in Paris in 1841.  Giselle is one of the oldest ballets still performed, but changes have been made since the first production.

In 1910, the Russian composer Igor Stravinsky wrote the music for the Firebird, based on Russian folk tales about a magical bird.  It was the first time that the Ballets Russes had music specially composed for them and it is one of Stravinsky’s best works.  The ballet features an energetic dance by the firebird wearing an elaborate costume.

GK Questions about Ballet for kids

Answer: In the dressing room

Answer: To keep their muscles warm and present stains and injuries

Answer: No (changes have been made since then)

Answer: a prince or an evil sorcerer