A theatre is where plays and other forms of entertainment, such as ballet or opera, are staged.  A theatre can be as simple as a piece of ground outdoors or a huge and complex theatre building designed especially for staging plays.  A major production requires a number of different staff, from the director and producer to stage hands. 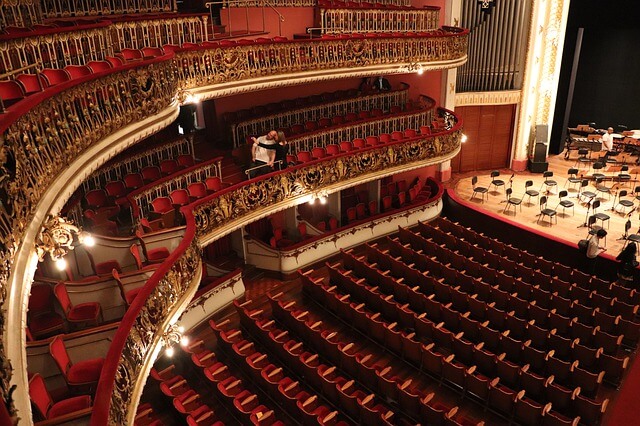 New York’s Metropolitan Opera House, known as the Met, is a big theatre.  The auditorium – the place where the audience sits – can hold up to 3,800 people.  Every time a performance is put on, the theatre employs about 1,000 people.

The clothes the performers wear are called costumes.  They are designed carefully because fabric looks different on stage, under lights, than in daylight.  The costume designer works with the lighting designer and set designer.

The person who designs the layout of the stage and the scenery is called the set designer.  A set designer often makes a scale model so others can see the design.

The people who produce the scenery are known as set builders.  Some may be stage carpenters working with wood.  Others may be skilled scenery painters, plasterers or steel welders.  A set is often built in a workshop, then assembled on the stage.

The people who run the sound, lighting, scenery and special effects, such as stage smoke, during a play are stage hands.  They are also responsible for props.  These are objects used in the play, such as a suitcase or tray.

The people who take care of the costumes for a play or ballet are called dressers.  They keep the clothes clean and mend them if they are torn or damaged.  Dressers also help the performers get dressed.  They may need to help them make a quick change, sometimes in the wings (the sides of the stage, out of sight of the audience).

Question and Answers About Theatre

Answer: False (dressers are in charge of the costumes)

Answer: On the stage